Overtaken by the Future

In some of my work I speculate on 'hot' phenomena to dissolve and disappear in the future; for example we all know YouTube isn't going to last forever.

Some phenomena disappear quicker then expected.

The work titled '20th Century Nostalgia (Slapstick)' combined a very 20th century phenomenon with an image very much part of 'now'. That 'now' will definitely be part of histroy soon.

Slapstick can not be seen apart from the first era of motion picture history. Although it is still very popular in contemporary comedy, slapstick will always be associated with the movies from the 1920's and 30's.

At this moment most of us use Facebook as a social tool. We all use the 'like' button several times a day, but the famous 'thumbs up' will disappear in the near future. An icon will disappear, as most of the Facebook users associate the 'thumb' and 'like'.

Posted by pilgrimindisguise at 5:33 AM No comments: 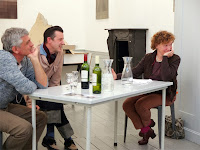 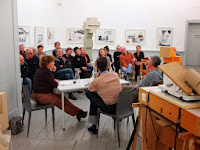 Photo's: Theun Okkerse.
Posted by pilgrimindisguise at 3:40 PM No comments: