During the 2012 edition of Poetry International Rotterdam several art exhibitions involving language are being organized. They can all be found in the Language & ART Gallery Tour.

In Rotterdam CS, in the midst of it's transition into a new modern train station,  the exhibition Wachten = Verlangen (trans. Waiting = Longing) takes place. On each platform a work of art can be found.

Track 14 finds the sculpture 'Modern Classic (bl**p)' placed high upon one of the remaining elevator shafts of the old station building designed by Sybold van Ravesteyn.
(Sybold Van Ravesteyn is best known for his designs from the late 1930's and early 1940's that didn't conform to the formal modernist movement. The Rotterdam Zoo Blijdorp (1939-41) and the theatre hall in Dordrecht (1938) are the best examples of his playful use of slightly kitschy Baroque elements.
In the late 1940's and throughout the 1950's Van Ravesteyn designed many railway stations for the Nederlandse Spoorwegen. Rotterdam Central Station was one of the last main station buildings by Van Ravesteyn, now being demolished and replaced. Benthem Crouwel are the architects of the new CS.)
Posted by pilgrimindisguise at 9:02 AM No comments: 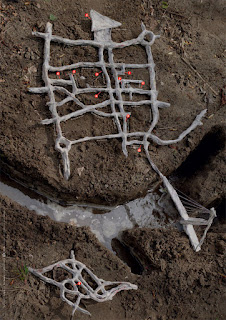 Posted by pilgrimindisguise at 4:14 AM No comments: